Why Coca-cola Is Changing Its Marketing Brand and Market Strategy

Coca-Cola’s brand image and strategy in recent years seemed somehow etched in stone. It was clear what the company was and it was equally clear that it sold. And yet, recent years have called for an examination of conscience and a rethinking of what was and what was done. Things have to change. The positioning strategy and the values ​​that Coca-Cola has been selling in the market in recent decades have worked for it. Coca-Cola is one of the best-known brands in the world and one of those that has had the most presence in consumption patterns. Everyone knows who and what Coca-Cola is and in a way everyone has consumed it at some point.

As you remember in marketing week, which has carried out an in-depth analysis of what. The giant is doing right now in terms of image and brand, coca-cola is at a critical moment. The category in which it operates is in the American Samoa B2B List midst of a deep crisis of. Identity and relationship with its consumers, which also puts its brand in a complicated situation. Coca-cola has to be able to renew itself, experiment and innovate. If it wants to play according to the new times. It may not seem as imminent as renew or die. But it is worrying enough to affect the company’s medium and long-term strategy. Coca-cola must find its place in the market again.

Stop Being a Soft Drink Company to Be a Beverage Company 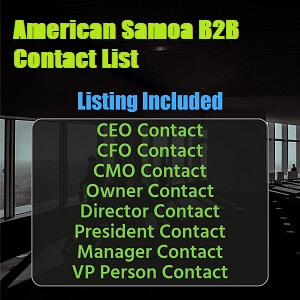 They are no longer a “Soda company,” possibly because soda is the very thing that is in a very difficult situation right now. Not only did the new regulations and the new pro-health measures put things to soft drinks. As sugary drinks, but also the company’s income in recent years began to show symptoms of being affected. Coca-cola wants and needs to continue growing. But to do so it has to find new windows and new ways to connect it with consumers. Hence all those new products, relaunches, and new flavors. The giant is not only entering new market niches but is also reinventing. Its usual products via formulations with less sugar or rebranding processes to make them more attractive to new consumers.