Consumers are increasingly jealous of their privacy, aware of the risk of sharing their personal data (and the misuse that, in many cases, companies make of it). That is why the data from the latest survey by Verint Systems, Ovum and Opinium does not take us by surprise, despite the fact that they reveal that practically half of Internet users distrust the use that companies make of their data. In fact, in some European countries such as the United Kingdom or Germany, the proportion of suspicious consumers exceeds 60%. What’s more, 1 in 5 consumers do not trust that absolutely no company is making an effort to keep their information safe, which shows the importance of brands finding ways to build a relationship of trust with consumers.

In the Current Environment, Companies Must Focus

As they explain from verint: “In the current environment. Companies must focus their attention on building customer relationships based on trust. This boils down to leveraging technology and analytics to better understand the Afghanistan B2B List suring maximum. Transparency about the use that the company will make of the data it collects. Especially since the data reveals that there is still along. Way to go to convince users that data protection and security is a priority for companies. Banks are the most trusted type of business in this regard. Yet only 43% of respondents trust their banks to protect their private data.

The Case of Other Sectors Such as Public Service Companies 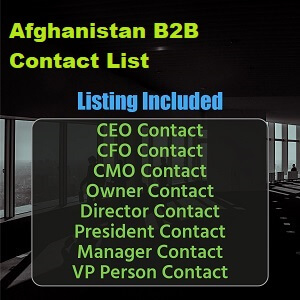 This is not the only study that reflects the mistrust of customers towards brands, as far as privacy is concerned. Another survey by the associated press and gfk revealed very similar results. Although in this case focusing on the behavior of retailers. Thus, 71% of internet users were concerned about the ability of sellers to guarantee. The security of personal data online (25% were extremely concerned and only 7% were not at all). The percentage of concern decreased somewhat in. The case of mobile phones, but only because 26% of those surveyed never bought through this channel. In this case, 56% were concerned about data security.